On this will the spirit survive,
that we are building each
days of our lives.

Never losing hope for progress,
ever seeking strength of soul.


Vision
Our vision is to continue providing quality, relevant, and flexible education of international standards that will produce students fully prepared to face all challenges in a real world.

At it's establishment , 'Nisi Dominus' was adopted as the school motto. The motto is a summarization of the Latin translation of Psalms 27 'nisi Dominus aedificaverit domum in vanum laboraverunt qui aedificant eam nisi Dominus custodierit civitatem frustra vigilavit qui custodit'.

Meaning 'unless the Lord build the house, they work in a useless thing who build it; unless the Lord guards the community, he keeps watch in vain who guards it'.

St. Mark's International and Alumni extends a global invite to all former students, current students, teachers and parents to attend the Centenary Celebration on 10 August 2010.
The school is celebrating 100 years of existance, His Majesty the King Mswati III will be visiting the schools on 6 August 2010 which will be a Friday. He is also a former student since he once enrolled in the school.

On the 10th August which will be a Tuesday, students, parents and former students will also be celebrating the existance and excellence of the school for the past 100 years. Some former students are overseas and have confirmed to be flying to the country on August to attend the Centenary Celebration. 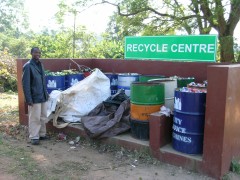 On 7 August 2010, we will have a walk from Mangwaneni to The City Council premises. This is a recycling walk for the school, we believe in recyling our waste and protecting our environment. Everyone is welcome to join us, parents, former students and anyone willing.

Launch of Portuguese as second language in Swaziland.

St. Marks Primary School is honoured to be chosen as the first Government school to offer Portuguese as a second language in the Kingdom. As a regional language, origins in Mozambique and Angola, it is relevant to offer this as an optional second language here.
The School is grateful to the Ministry of Education, the Portuguese Consul and his Government for supplying a teacher from Portugal for pioneering this launch.

See photo of the official launch backed by the Ministry officials, the Consul, the teacher from Portugal, and the Head and Deputy Head.

Back in August 1960, St. Marks Fete (to honor with celebration, an outdoor entertainment with stalls and sideshows) took place at the school. It was for raising funds for a new school swimming pool. Looking around the school now, one realizes that humanity is much the same from one generation to another and there are still those today prepared to give their time and energy for the welfare of the school.

*Trackly Trevor ; This man is a South African based magician who visited St.Mark's primary School on the 21 April 2009 to perfom magic for the kids.What we liked about Trevor, his magic teaches moral values and choices and test how clever the kids are.